Living from Surfboards at Kovalam 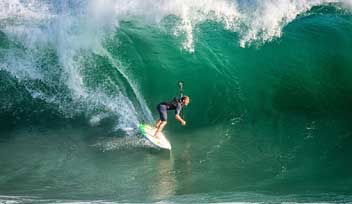 Kovalam is not as famous like Varkala as a surfing destination since the waves here are not as high. But surfing as a sport is slowly picking up in Kovalam and that makes people who carve out a living by renting out surf boards, sun beds, umbrellas and the likes on the beach, happy.Boogile boards or body boards are becoming more popular with the tourists as they can be ridden prone (on the belly) or on the knees and doesnt require as much skill as surfing. Most of these vendors are people with health issues or physical disabilties and therefore unable to do other strenuous jobs other than this, which is quite stress free. Of course one has to stand in the sun from early morning till dusk in the hope of getting business.Hear the story of the man who earns his living by renting out surfboards and boogie boards on the Lighthouse beach at Kovalam. He came to this profession because he couldnt do any other work due to his poor eye sight. He got the surf boards from a few foreigners several years ago for a nominal amount as they would have felt that the boards were too old to take back and not worth shipping back home. He charges by the hour and the rate is often negotiable depending on how much time the customer uses it. He earns the maximum business between November and May which is the tourist season in Kovalam and feels that the English and the Americans are most sought after customers who are interested in this sport. Though during the season, he can earn more than Rs 1000/-, there may be days during the year where one cannot think of earning anything. Even for doing this business, he has to take a yearly license from the Port Authority, but even this he is not sure of the future as the Authorities are planning to issue fresh licenses from next year only to those below poverty line families living in coastal areas.